How to Sear Blackened Tuna Steak

February 20, 2021
This post may contain Amazon or other affiliate links. As an Amazon associate, I earn from qualifying purchases.

Blackened tuna is a quick flavorful preparation that is great served on its own or served over salad or your favorite veggies. The spicy crust is a flavor bomb in every bite.

How to Sear Blackened Tuna

Blackened Tuna Steaks are one of my favorite ways to prepare tuna. The charred spicy outer crust and the tender rare center are the perfect flavor and textural contrast. Blackened tuna is seared at very high heat in a pan or on a grill using clarified butter (ghee) or a high smoke point oil like avocado oil.

The unlike beef you want to keep the tuna refrigerated until its time to sear. you want the tuna to be as cold as possible so you can keep the center rare and develop a crust on the outside. make sure the pan is hot before adding the oil and seasoning the tuna.

You can use Cajun or Blackening seasoning to season your tuna steaks. Both contain a lot of salt but I still recommend seasoning liberally so you get the best crust. My absolute favorite seasoning to use for blackening fish is Chef Paul Blackened Redfish Magic. It has the best flavor and spice level in my opinion.

I am a big fan of using carbon steel pans for high heat searing. Cast iron also works well but I find they take a while to heat up. Carbon steel gives you the searing ability but takes a fraction of the time to heat up and cool down. Avoid searing with a nonstick pan due to the fact that they are not designed for high heat cooking.

Having a sharp knife is provably the most important thing when slicing tuna. Before slicing sharpen your knife using a honing steel or a handheld knife sharpener. After you sharpen the knife wipe it off with a damp cloth before slicing. Make small even slices cutting across the grain of the tuna steak. I also recommend letting the tuna rest for just a minute or two once you have removed the tuna from the pan.

What is the difference between Yellowfin and Ahi Tuna?

Ahi and yellowfin are actually just different names for the same species of tuna. Ahi is a term often used with tuna from Hawaii but yellowfin can be caught in many different parts of the world.

Is Tuna Healthy to Eat?

Tuna is a fantastic source of protein and omega 3 fatty acids. Its overall low in calories and fat containing only 145 calories and 3.5g of fat per 4oz portion. Tuna also contains virtually zero carbohydrates making it perfect for low carb lifestyles.

What is Better Albacore or Yellowfin Tuna?

Albacore tuna also referred to as bonito is one of the highest quality tuna species. Albacore is is considered to be superior to yellowfin in flavor and texture. Both species can be consumed raw or rare and are used in all sort of cuisine. Yellowfin tuna can grow to be much larger maxing out around 400 lbs whereas albacore tuna top out around 55 lbs.

Can I Eat Tuna Raw?

Generally tuna is considered safe to eat raw. Make sure to purchase from a reputable source. Frozen tuna can sometimes be safer than fresh because freezing the tuna can kill any possible parasites. Due to the amount of mercury in tuna it is recommended to limit your consumption. For Pregnant women it is recommended to avoid tuna and other predatory fish. To learn more checkout this article about how much tuna is safe to eat. 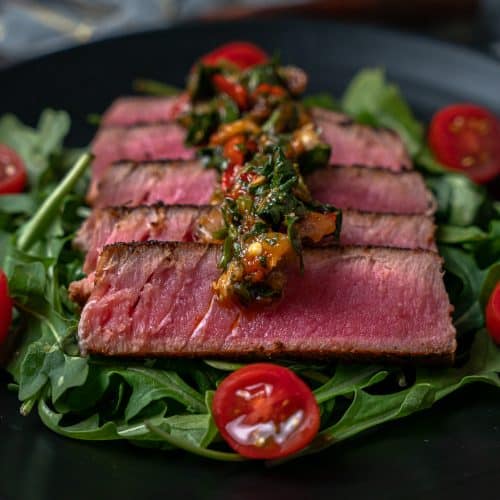 Each portion is 4oz. Make sure the exhaust fan is on high and you have a window cracked because this method can create a lot of smoke. doing this outside is not a bad idea whenever possible. blackened tuna is great on its own or served with a dipping sauces like sugar free bbq, ranch, bleu cheese or honey mustard. I also serve it over salads or along side cauliflower mash or cauliflower rice.