April 19, 2020
This post may contain Amazon or other affiliate links. As an Amazon associate, I earn from qualifying purchases.

The dark & stormy is the unofficial drink of Bermuda, the shipwreck capital of the world. Since I think we all feel like we are shipwrecked at home I thought I would share my keto friendly version known as the Keto Kraken Quarantine Cocktail!! It’s a double pour in a big glass because...well you know why!

Sometimes you just need a drink.

I’m sure you’re going a little stir crazy being stuck at home and so am I. And though I’m not advocating pouring yourself a cocktail at 10am Monday morning to break up the monotony I do understand that from time to time we could all use an adult beverage. Dark and stormy have always been one of my favorite cocktails mainly because I’m a fan of ginger beer. Combine that with some fresh squeezed lime juice and your favorite spices rum and you’ve got a tasty beverage you can enjoy on the back porch still wearing your pajamas...I don’t judge.

A Brief History of the Dark & Stormy

The dark & stormy is a refreshing cocktail  made with Dark rum and ginger beer. The name is said to come from a sailor who proclaimed that the cocktails' murky color resembled storm clouds. No one can confirm this story and so the mystery and legend lives on. The dark and stormy is known as the unofficial beverage of Bermuda as well as the global sailing community.

The first mention of the cocktail goes back to sometime after world war 1. It’s said that the drink first appeared at a ginger beer factory owned by a Royal Naval Officer. The sailors began spiking the ginger beer with a healthy dose of dark rum and the rest is history. Today the beverage is served all over the globe but is most popular in the carribean islands.

According to Esquire magazine and my friend Athena: technically speaking a Dark and Stormy can only be made with Goslings Ginger Beer. I say if we can make pizza out of cauliflower then you can use whatever ginger beer you like! Viva La Resistance... Or something like that.

What’s the difference between ginger beer and ginger ale?

Both beverages are made from ginger but ginger beer is actually fermented and brewed whereas ginger ale is just a carbonated beverage made from ginger and water. Ginger beer tends to have a much more pronounced ginger flavor than its ale counterpart.

Barritt’s Ginger Beer was founded in 1847 in Bermuda and Bon appetit rated it one of their top 4 favorite ginger beers. It’s one of the most popular brands in the carribean for its distinctive flavor.

Does Dark Rum Have carbs??

According to fatsecret.com Kraken Spiced Dark Rum has 105 calories per 1.5 oz and zero carbs or sugar. Even though rum is traditionally made by distilling and fermenting sugar cane juice or molasses the sugars are left behind as a byproduct of the distilling process where liquid is turned to vapor and then back to liquid once again. The dark rum is then aged in barrels where it picks up oaky notes of vanilla. Other spices like ginger, clove and allspice are used to balance out the flavor of the rum.

What you’ll need to make The Keto Kraken.

If you’ve got some fresh limes, dark rum and ginger beer you’re almost ready but you may need a few tools to make this drink efficiently. A citrus juicer is a handy gadget that I use often for all sorts or recipes to get the maximum amount of juice from my lemons and limes. It also keeps all the seeds contained so you don’t have to fish them out of your drink later. I also really enjoy drinking my keto Krakens out of a 24 oz.wide mouth mason jar with a handle. Sometimes I break into pirate songs sloshing my cocktail from side to side but that’s another story.

Finally since I’ll be shamed otherwise I drink from these festive paper straws. Now truthfully I don’t love paper straws but I’m willing to do my part in cutting back on single use plastics. I actually prefer these metal reusable straws but they don’t Photograph near as well. Now you’re ready to sit back, relax and enjoy this keto friendly beverage...you’ve earned it! 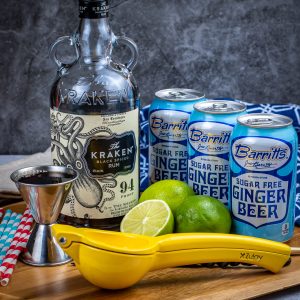 The Keto Kraken AKA Dark & Stormy

Technically the Kraken Rum should be floated over the top of the ginger beer which I did not do. this creates a more cloudy or "stormy" look to the cocktail.