November 26, 2019
This post may contain Amazon or other affiliate links. As an Amazon associate, I earn from qualifying purchases.

Warm fudgy brownie combined with cheesecake topped with chocolate chips in a cast iron skillet. Do I have your attention??? Black Bottom Brownie skillets are the perfect shareable dessert for chocolate lovers. Plus this recipe is gluten free as well as low carb for your guilt free indulging pleasure.

What are Black Bottom Brownies?

Not only do they look cool but cast iron desserts always seem to just taste better too. Something about a warm gooey hot out of the oven dessert that just feels so indulgent. Not to mention you can easily top the skillet with ice cream for the perfect brownie ala mode. I have a set of  5” cast iron skillets that I use all the time for recipes like my Sloppy Joe Shepherd's Pie. Those cast iron skillets are also my go to when it comes to making desserts.

You can take just about any cookie recipe you find and bake it in a skillet and boom, it’s more awesome. Cast iron is also great for making Breakfast Skillets because they’re easy to bake and everyone can add the ingredients they prefer.

Allulose: How Sweet it is!

Lately I’ve been using Allulose in my recipes instead of Monkfruit sweetener or stevia. It’s about 70% as sweet as table sugar but doesn’t have the cooling effect that other keto sweeteners like erythritol have. The texture of the brand I prefer is almost a powder instead of a granular texture so it’s great for baking recipes. The black bottom brownies have a subtle sweetness but are not overwhelming which is perfect for me. I generally like dessert that are less sweet. My lemon Olive oil cake recipe is a great example of a dessert that isn’t overly sweet but still satisfies my sweet tooth.

Fudgy or Cakey Brownies...which is best?

Personally I’m team fudgy brownie but I know some others prefer a cake style texture. Either way you’re covered with this recipe. For fudgy brownies I bake them at 350 degrees for about 22 minutes. For cake style brownies l bake them an additional 6-8 minutes for a total of just under 30 minutes. As long as the cheesecake filling has set up you’re good to start digging in. You might want to proceed with caution as the fudgy goodness will resemble chocolate lava at first. Otherwise just wait about 5 minutes so the brownies can cool just enough to not cause bodily harm. 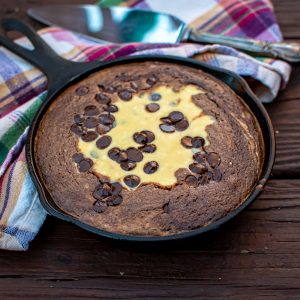 Next Post
Holiday Gift Ideas for your Keto Foodie: 25 gifts under $25 Bucks »