June 11, 2020
This post may contain Amazon or other affiliate links. As an Amazon associate, I earn from qualifying purchases.

Chuck Roast is a large primal cut located on the front upper shoulder of the cow. It contains many different muscles and connective tissue but overall Chuck Roasts are relatively lean cuts. The Brisket is located underneath the Chuck and has a much higher fat content displayed in the marbled cross section. Both cuts are optimal for low and slow cooking methods like smoking, roasting and braising. Chuck Roast is referred to as “poor man's brisket” because it’s a cheaper cut of beef that can be prepared the same way.

I used my new Camp Chef Woodwind WiFi 36 for this cook because it’s easy to monitor and adjust the temperature from anywhere. Another feature I like is that you can adjust the level of smoke that the pellet grill produces to really impart a robust wood flavor into the roast. When running a high smoke level you sacrifice a little temperature consistency so once I wrap the meat I adjust the smoke level to one so my temperature is on point as I finish the cook.

How to Smoke a Chuck Roast

Start off by aggressively seasoning both sides of the Chuck Roast with your favorite rub. I used Utz Works Prime because it’s great on beef and I have used it on briskets one the past. Next I place the roast on the smoker set to maximum smoke and leave it alone for 2 hours. This gives the meat a chance to absorb a lot of smoke. Then check to see if the rub has adhered to the roast completely before I start mopping the Chuck Roast. Otherwise the mop will just wash off the rub. I continue to mop the roast once an hour until you reach an internal temperature of around 170 degrees F.

Now it’s time to wrap the Chuck Roast in an Aluminum Half Pan and braise with a cup of the mop. You can continue cooking at around 225 degrees F or you can speed up the process by raising the temperature as high as 275 degrees F.  I don’t like to cook any higher than that for fear that too much moisture will evaporate and dry out the roast.

After about two hours of braising I remove the foil so the crust can get more smoke as the meat reaches optimal tenderness. Once your Chuck Roast reaches an internal temperature of 200 degrees F it’s time to start probing the roast to check for tenderness. The Probe Thermometer should go into the meat with very little tension. If the meat still seems tough just continue cooking.

Once the Chuck Roast is tender and fully cooked make sure to rest the meat for at least 15 minutes. Cover with foil but still sitting in the braising juices. If you want to add some extra richness add a few pats of butter on top of the Chuck roast. You can also pour over some of the braising liquid as well. Slice the beef against the grains into pencil thick slices using a sharp slicer knife. If the meat is dry you can always rehydrate the slices in the braising liquid. 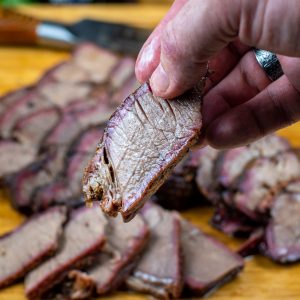