April 9, 2020
This post may contain Amazon or other affiliate links. As an Amazon associate, I earn from qualifying purchases.

A spicy Tex-mex asian fusion with a Boston accent. these Sriracha Lobster roll tacos are an over the top take on the classic Lobster roll. Fresh lobster combined with sriracha and mayo piled high on some low carb tortillas are a meal you'll be craving again and again

Quick Guide hide
1 Strange Time For a Lobster Roll Recipe
2 How much meat do you get out of a lobster?
3 Saving some Coin Making Lobster Rolls at home.
4 Dirty Keto?
5 A brief history of Lobster
6 Why do you cook lobsters alive?
7 Do lobsters scream when you cook them?
8 How long to cook a lobster?
9 More Meal Prep Ideas
10 Sriracha Lobster Roll Tacos
10.1 Ingredients
10.1.1 Additional Ingredients
10.2 Instructions
10.3 Notes
10.4 Nutrition

It might seem strange to be doing a Sriracha lobster roll taco recipe during a global pandemic. However the price of Coldwater lobster has actually dropped significantly since most restaurants are closed and demand is at an all time low. China is actually the biggest importer of live lobster and since the Coronavirus hit China the demand and ability to ship overseas has almost stopped completely causing the drastic price drop. I recently called up my local seafood market and had them order me two 2 lb. live lobsters. I was blown away by how cheap they were. Now I’m not saying this is a budget friendly meal by any means but if you’ve got a few extra bucks and wanted to try a lobster recipe you'll never forget nows time to do it.

How much meat do you get out of a lobster?

Folks that know more than me will tell you that you will yield anywhere from 19-22% from the Live weight of a lobster. so keep that in mind when your deciding how much lobster to buy. I miraculously ended up with about 9 oz. from a 2.25 lb. lobster and that included using a rolling pin to extract about 1 once of meat from all of the legs combined. even though its a lot of extra work the leg meat is very sweet and delicious. from a value stand point 1.25 lb. lobsters are the best value. as the size of the lobster grows so does the price tag. Another cost effective trick for lobster rolls is to chop up some shrimp, crawfish tails or even some imitation crab. I don't judge because I've done it myself. Checkout My Boiled Lobster Recipe w/ drawn butter on my other website grilling24x7

Even though lobster is cheaper now than its been in years it docent mean that lobster is cheap. the poor yield of meat can really hit the wallet hard. the Average lobster roll at a restaurant contains anywhere from 4-6 oz of actual lobster and cost as much as $34 bucks at a nice seafood restaurant. For about $50 bucks I made almost 15 of these Sriracha Lobster roll Tacos and believe me we ate like kings of the Quarantine. Still not a cheap meal but a hell of a lot more cost effective then ordering out for the same meal.

I really hate this term but I get it, these Mission carb balance tortillas have some questionable ingredients and will definitely get some eye rolls from the Strict/Clean keto crowd. I fall somewhere in the middle, most of my meals are meat and veggie based but sometimes you just need a taco and these are a better option than traditional flour or corn tortillas. There are some paleo brands like Siete that I've heard great things about but I haven't tried them myself. You can always use Napa cabbage or lettuce to use as a vessel to get lobster from plate to mouth.

A brief history of Lobster

The first mention of lobster goes all the way back thousands of years to first century Greece. Vikings actually ate lobster during their deep sea voyages. Early settlers in the northern Colonies lived off of lobsters because they were so plentiful, sometimes known as the poor man's protein.

Later lobsters were even served in prison. It was served so often that there were complaints that it was cruel and unusual punishment. It wasn’t until the advent of the railways that lobster went from prison fare to exotic upscale cuisine. Cross country travelers developed a taste for lobster often perceived as a dish of the well to do. In World War II lobster was one of the only foods not rationed by the government. This made lobster affordable and readily available option for Americans. This however would cause a surge in this crustaceans popularity causing the price to surge.

Why do you cook lobsters alive?

First and foremost lobster is best when it’s fresh and live lobster is as fresh as you can get. Secondly lobster meat decays very quickly causing the meat to become mushy and have an unpleasant taste. The most important reason to cook lobsters while they’re still alive is safety. Lobsters are highly susceptible to a bacteria known as vibrio. After a lobster is only dead for a few hours, vibrio can begin to show up on the meat. Even cooking the lobster won’t kill all the bacteria. Vibrio is no fun and can even cause death in rare occasions. Mostly when consumed by people with weakened immune system‘s

Do lobsters scream when you cook them?

No, lobsters don’t have vocal cords and it’s uncertain if their pain receptors even realize they’re being cooked. If you're having a moral dilemma over preparing lobsters you can place them in the freezer for about 45 minutes. This “puts them to sleep and is considered the most humane way to cook lobster. Alton Brown said it best when he brought up the point that lobster's closest relative is the cockroach and  I don’t have any issue killing those. My advice is you do what feels right to you. I drop them in the hot water as soon as it comes to a boil. If you feel that putting them in the freezer puts your conscience at ease then go with that.

How long to cook a lobster? 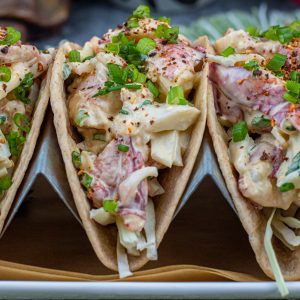 Nutritional info is for the sriracha Lobster roll filling and Cabbage. Add the tortilla or vessel of choice separately for accurate macros.

How to Sear Blackened Tuna Steak