September 24, 2019
This post may contain Amazon or other affiliate links. As an Amazon associate, I earn from qualifying purchases.

Love Amazing Keto Recipes? Sign up so you get all the latest Recipes

If you want a fancy Delicious seafood dinner that’s easy to prepare this Keto Seafood Imperial Is the way to go. Scallops, shrimp and crab combined with a flavorful imperial sauce and baked to golden perfection. If you love seafood or are a pescatarian this is going to be a recipe you make over and over.

Lately I have definitely been on a seafood kick. Living in the mid Atlantic area I have access to plenty of fresh seafood to choose from. Seafood Imperial is very similar to a crab cake mixture except I add shrimp and scallops and don’t use any filler to bind. There was 5 good size portions making this dish significantly cheaper than if I ordered this at a restaurant. A rough estimate puts this recipe at about $10 per portion whereas I could see the same dish costing $25-$35 depending on the restaurant.

When buying fresh crab meat always pick through it looking for shells. If you’re using pasteurized crab there tends to be less shells. I decided that lump crab would be best for this recipe instead of the more expensive jumbo lump. Either one will be tasty but backfin or lump will save you around $10. Another reason to go with lump is that it acts as a natural binder to hold the rest of the seafood together.

How to Prepare Seafood Imperial

The easiest way to prepare the recipe is to blanch the shrimp and scallops for about 2 minutes in boiling water. Then shock the seafood in ice water to prevent them from over cooking. After the shrimp have cooled you can peel and devien the Shrimp. Cut the scallops and shrimp into bite size chunks and then add them to the bowl with your picked crab meat.

Scallop Shells are so Fancy

You can use any type of oven safe baking dish to cook the seafood imperial in but if you want to really impress I recommend these reusable scallop shells. First off they look cool and make for a beautiful presentation. The scallops shells also conduct heat and will keep the seafood imperial hot. I happen to have some stainless steel ones that I picked up years ago but the natural white shells work great.

Use Seafood Imperial as a Stuffing

You can use seafood imperial as a stuffing or topping for fresh fish, chicken breasts or even lobster tails. You’ll see it as an add on options at higher end restaurants and I tend to get it whenever it’s offered. Seafood imperial is also fantastic on top of a filet mignon. I personally think that a halibut filet topped with crab imperial is pretty close to the perfect meal. Check out this Stuffed Tilapia Video if you want to sea a few different ways to stuff fish.

I chose to use shrimp, crab and scallops but you can add any seafood you like. I’ve seen chopped clams, lobster and mussels used in recipes. Even a flakes mild white fish like flounder can be used in place of crab meat for an economical version. Depending on what seafood you have available you can customize your seafood imperial to your liking. Prosciutto Wrapped Asparagus or a Cauliflower Mushroom Risotto would be fantastic sides to serve with this mouthwatering seafood bounty. 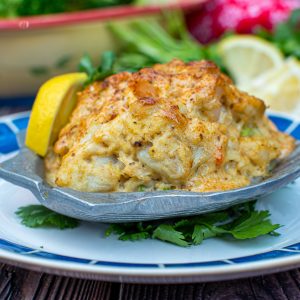